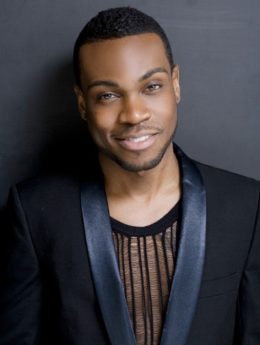 Merrell Hollis is a quiet storm that has influenced our perception of the exquisite. As a make-up artist and grooming expert, his creativity has catalogued mediums, models, innovators, celebrities and legends alike. His hands have effortlessly molded the images of an entirely new pop civilization of music, culture and the new black elite. His indomitable standard is precise but he disarms you with his smile, leaving imprints that have opened the doors to lasting relations. Born in Georgia, Merrell’s fascination with couture and make up commenced when he was just a boy. At seventeen, he forced his way onto a shoot with his favorite R&B group 112. It wasn’t long before he was being nurtured under the guises of Maurice Beaman who mentored and imparted expert advice. His degree in Fashion Marketing and Design from American Inter-Continental University and being a licensed Barber and Esthetician also provided a solid perspective of how he would conduct himself as a business man in New York. Today Merrell has anchored himself as reputable force in the industry. Whether dealing with the esoteric, the sensational or the ordinary, Merrell’s eye for details has redefined fashion’s concept of editorials, commercials and beauty presentations. His approach to beauty alone is epitomized in how he captures the emotion allowing its effect to grab you as you turn the page. Merrell is the grooming consultant and make up person for all the artists at Sean Combs Bad Boy Entertainment. He is also responsible for the many faces of our beloved queen of Media Wendy Williams. Both these innovators have allowed their faces to be canvassed by this young visionary who delivers them to the public with elegance and sincerity. His cosmetic expertise has been shared with Access Hollywood, Entertainment Tonight and the CBS Early Show. Editorially, his artistry has graced the pages of Vogue, Harper’s, Bazaar, InStyle, Vanity Fair, Essence, GQ, Details, Interview, Rolling Stone, People and Men’s health. His work had also appeared in music videos for Sean ‘P.Diddy’ Coombs, Mary J Blige, Nelly, Usher, Faith Evans and Ludacris. Some of his celebrity clients include Naomi Campbell, Diane Von Furstenberg and Kim Cattrall. Throughout the decade, Merrell’s consultancy within the beauty industry has allowed alliances with the leaders of Clinique, Bobby Brown, MAC, Lancôme and Versace. His work also appears on product packaging for L’Oreal Paris and Soft Sheen Carson in addition to also being on display in the company’s advertising. He believes that good skin is foundation for great make up